The San Francisco Baseball Giants were depressingly continuing their early season streak of being down in the first inning while a mostly oblivious crowd of thirsty San Franciscans and Bay Area visitors filled Cellarmaker Brewing’s SoMa taproom. Having snuck in five minutes after their 1:00 opening time, I sipped on four little beers and tap-tap-tapping ridiculous adjectives into a mobile device at a seat tucked into the end of a table overlooking Howard Street. A young man holding a (large) beer asked if the seat across from me (where my little beers were selfishly spread out) was taken. I said no. The next ninety minutes went by in a lovely, beery rush, as the friendly New Yorker-via-SF-via-LA named Vince and I talked about everything from the perils of attempting your own plumbing repairs to Chicago and Los Angeles emo in the early aughts. We might have discussed hazy IPAs too, but it was brief… 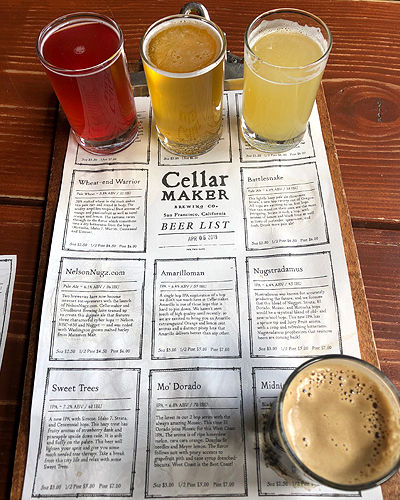 Sometimes the coming-down from stressful situations seems slightly more strenuous than the actual event. Self-doubt and anxiety over what was or wasn’t said or done can be an onerous burden. Walking into an almost-deserted City Beer Store [pictured above] after (missing the fenced, unlabeled Mission Street entrance twice, and) the events of the day, however, my usual drinking partner and I felt immediate relief. Sitting in silence for the first few sips of our respective beers, studying the colorful vertical tap descriptors, and salivating over the myriad of beer choices, we eventually started reflecting on the minute success, failures, and hilarities of the past few hours while sharing knowing glances and rueful chuckles…

Pours a delectable yet incongruous amber-ish brown—but clear, like a ‘proper’ Pilsner. Black patent malt, freshly ground African coffee dark roast, and abject relief all show up as initial aromas. Lemon wheat bread flavors quickly darken into a malty rye bread bitterness. Chocolate nibs are there too. Bitterness seems entirely malt-based, although maybe floral-ish hop flavors (nasturtium-flowery, not hop cone-flowery) and aromas show up as it warms. Grape nuts in diluted bourbon, minty and oregano-y flavors show up in the warmer beer too, but, as with a ‘proper’ Pilsner, lemon is at the finish. 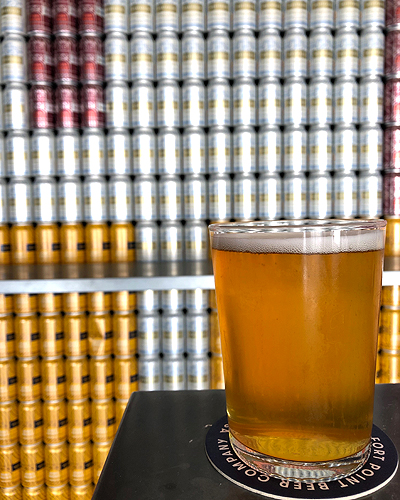 A quick excursion to the Embarcadero for ceviche took me past Fort Point Beer Company’s Ferry Building outpost. Turns out there was just enough time to grab a beer before the next round of speakers, plus the detour would allow me to attempt to work out two distinct—yet oddly related—issues. Twenty-four minutes later, rushing down Market at 1st—one issue resolved and the other worse than ever—the lingering coriander, bubble gum, and lemon memories briefly made me smile…

Crushed coriander, bubble gum, lemon rind aromas greet you as you gaze out at the Embarcadero. Dry pear cider, guava, chewy rounded lemon, tropical fruit bubblegum, coriander all come together in a lovely mélange with Belgian yeast spices that fade as Sonder warms. You might guess that wheat would have been used as a grain from the enveloping mouthfeel, but (like me) you would be wrong, as flaked rice and dextrose were the add-ins. A lovely beer for troubled virtual human-human interactions.

The imminent demise of society via social media is assured, yet when semi-random social media connects you with a friend you spent practically every day with for four years but haven’t seen in half a decade, it’s the absolute best. My drinking partner and I got to spend about three fantastic hours catching up with one of the most genuine humans on the planet at South Park’s Black Hammer Brewing. Although we talked about days gone by, the quirks and eccentricities of our friends close and far away, the genius and danceability of Unknown Mortal Orchestra, and our grand plans for the bright future before social media ruins it all, we never once discussed mouthfeel, lactose, or experimental hops…

Human interaction score: Infinity plus one/100 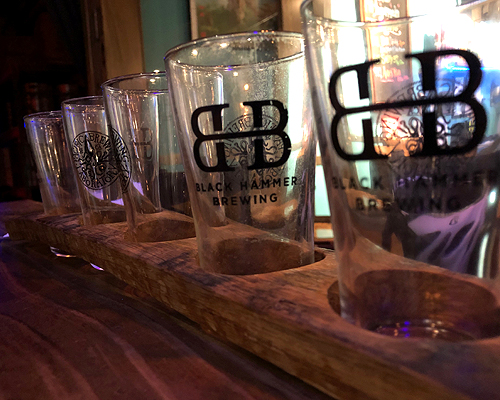 How this beer went down was as follows, kinda: my drinking partner ordered Hoppy Pillows expecting a juicy-type IPA. I ordered Spitkiss Revolution, expecting a west coast IPA. The piney, chewy, slightly oily, not exactly hazy Hoppy Pillows was my favorite. It was also confusing. Maybe we switched them. But both were delicious and took a lovely back seat to the top-notch human interaction. 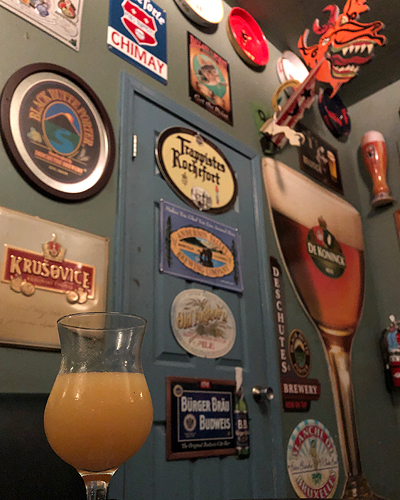 Many, many words have been espoused about the Lower Haight’s venerable Toronado Pub, celebrating its thirty-second anniversary in 2019. Some of said many, many words describe their jukebox. Very few of them describe the anguish, anger, and abject misery suffered by other Toronado patrons therein when my five American dollars are used to pick eighteen songs that accompanied a beer (or two). A true San Francisco treat.